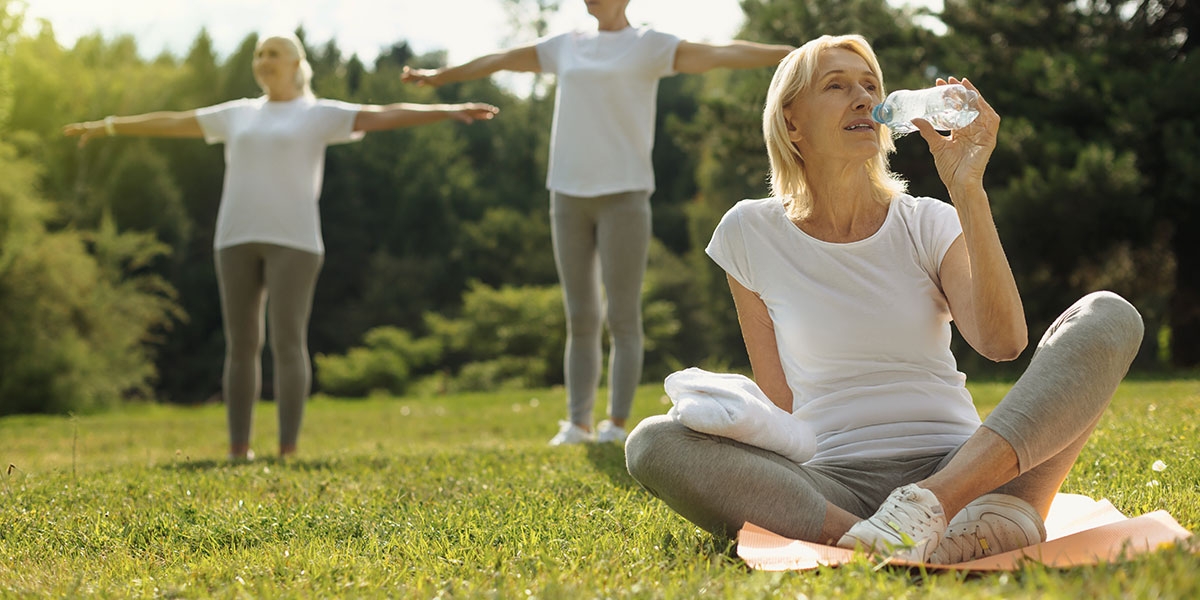 When water loss exceeds water intake, the result is dehydration. Dehydration is directly caused by any of the following: persistent high fever; heavy sweating; use of drugs that deplete fluids and electrolytes, such as diuretics; overexposure to sun or heat; persistent vomiting or diarrhea; and not taking in sufficient amount of water.

Dehydration Increases in Frequency in Adults Over Age 65 Risk Factors

The following risk factors are most commonly identified with dehydrated older adults:

Abilities, Dependency, and Need for Assistance

Mobility/functional ability (due to mental and physical issues) can contribute to an inability to recognize the need for fluids or to access needed fluid replacement. Problems with physical mobility, such as those caused by stroke or arthritis, may affect manual dexterity and the ability to hold a cup of water; limited self-care abilities may require assistance with fluid intake.

Additional research supports an inverse relationship between dependency level and fluid intake, i.e. the more dependent the older adult, the lower the fluid intake. This increased dependency creates more of a need for assistance by caregivers. People who acquire visual impairments may become dehydrated for this same reasoning.

Conscious Decision-Making and Need for Monitoring

Research has suggested that dehydration in incontinent patients is the conscious decision by the patient to limit fluid intake to reduce episodes of incontinence. The presence of multiple diseases and/or medications put older residents in skilled nursing facilities at risk for dehydration. When medications are not properly monitored with sufficient fluid intake, dehydration may result.

In addition, certain chronic conditions may take precedence over smaller concerns such as fluid intake. Caregivers in assisted living communities are trained to think in terms of helping with Activities of Daily Living (ADLs). One important ADL is preparation/eating meals, however, nutrition/fluid intake should be just as closely monitored as medications.

Universal, inevitable physiological changes occur as people age, which is one reason age is considered a risk for dehydration. These physiological changes include: altered homeostatic mechanisms that regulate fluid balance; reduction in the sense of thirst; the kidneys are not as efficient at conserving water; and visual changes. Those homeostatic mechanisms are altered with aging because of metabolic changes that occur. This reduces the body’s reserve capacity and the ability to respond rapidly when the balance is thrown off.

An additional metabolic change that occurs is the decreased sensitivity of the volume osmoreceptors that stimulate thirst. Older adults, then, do not feel thirsty and may not drink water when they are actually dehydrated. Thirst is the body’s way of indicating a need for water, and this signal actually lags behind the body’s need. Even with younger adults, the onset of thirst occurs when a person has already lost 0.8% to 2% of body weight. In other words, once people feel thirsty, they are already 2-3 cups dehydrated.

Heat exhaustion caused by dehydration resulting from a 5% to 6% loss of body weight includes the following symptoms: difficulty concentrating, headache, irritability, and sleepiness. Dehydration resulting in a 7% to 10% loss of body weight can result in heat stroke and death. Symptoms may include dizziness, spastic muscles, loss of balance, delirium, confusion, coma, low blood pressure, severe thirst, increase in heart rate and breathing, exhaustion, and collapse.

Issues Related to Dehydration and Aging

Among some issues related to dehydration and aging are: preventable hospitalization, increased morbidity and mortality, increased health care costs, and misdiagnoses. Dehydration is the most common fluid and electrolyte problem in both long-term and at-risk community-dwelling elderly. It is one of the ten most common diagnoses in patients age 65 and older for hospital admission reports.

In 1991, Medicare reimbursed over $446 million for hospitalizations with dehydration as the principle diagnosis, amid close to 50% dying within a year of admission, and 17% dying within 30 days of admission. Improper assessment can result in misdiagnosis. Often the first indication of dehydration is an acute change in mental status, reasoning, problem-solving ability, and memory or attention, characteristics very similar to depression and dementia.

Dehydration can be a primary cause of delirium, which has the same clinical manifestations as dementia, depression, psychotic states, and anxiety. Improper assessment also can lead to a chain of reactions including improper treatment plans (due to misdiagnosis), further complicating interactions among conditions and compromising the general health of the older adult and the ability to do something about it.

Due to increased risk factors for older adults, dehydration often increases after age 65. As dehydration increases, it is important to know the reasons for dehydration, its characteristics, and how to properly assess it. Presumably, proper assessment results in a higher probability of correct diagnosis and, hopefully, effective treatment. Effective treatment is especially important for older adults since they can become vulnerable with all of the interacting difficulties during the aging process. It is remarkable that so many health problems can be relieved merely by increasing water intake.

Trending
Risk Factors for Dehydration in Later Life
Bridging the Generational Gap Through Sports
MEDICARE: WHAT YOU NEED TO KNOW
Pets and Seniors
Categories