My Life is a Junk Drawer 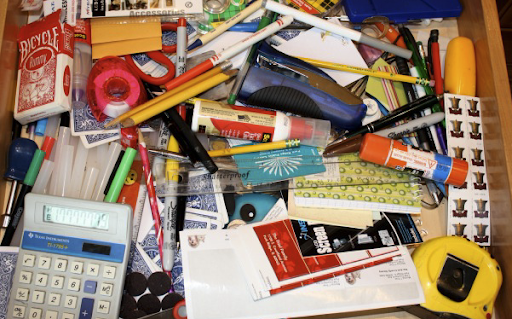 By CarePatrol of Chicagoland North

Marcy called my CarePatrol office about her husband Marvin. He had dementia, and she wanted to know about assisted living options “for when he gets really bad.” Marvin’s Alzheimer’s was affecting his short-term memory and ability to have meaningful conversations. The once passive man, often got angry and acted out when shopping or eating at a restaurant. He was also losing control over his bladder in public, which seemed to be affecting Marcy more than him.

When I arrived at their home for an initial meeting, the house was clean and the brownies she served were delicious. I admired the art posters that had been acquired over years of traveling. As we settled into our conversation, Marcy was feverishly looking for the notes I had asked her to prepare in response to questions I had about the couple’s daily routine. She also wanted to turn down the TV in the background but couldn’t find the remote.

Marcy went to a kitchen drawer that was stuck. She asked if I could help her get it open. As I forced open the drawer, she started to cry. She told me that no one had ever seen inside her junk drawer. I convinced her to let me empty the contents on the kitchen table and help her sort through the mess. Old batteries, McDonald’s ketchup, and dried out markers accompanied keys that had no locks, a cassette tape that hadn’t seen a tape player in 20 years, a calendar from 1989, a faded page from a Sears catalog, and the lost TV remote.

I’m never one to pass on a good analogy. We looked at the mess on the kitchen table, and I commented that the overflowing junk drawer was her approach to Marvin’s care. It was time to get to work and clean it out. On the outside, Marcy presented as confident and well put together. On the inside she was in turmoil. She put her junk away so that no one could see the mess.The junk drawer was full of stuff that she didn’t want to deal with—past due bills, an old phone that was once expensive but now worthless, and several traffic tickets. Our lives are also full of things we don’t want to face—unhealthy relationships, bad habits, or even our spouse’s dementia diagnosis.

We started to address the care situation.

Marcy did her best to shower and dress Marvin on a daily basis. He had fallen during that process many times, resulting in trips to the emergency department. She had to make peace with her past mistakes and get help with his care.

Marcy was embarrassed when Marvin wet himself in public or acted out at the grocery store. She did her best to hide her daily struggles from her family and friends. It was time to come clean with the people that loved her, and ask for help.

Marcy was overwhelmed with sorrow, grief and fear of the future. We needed to put a plan in place to give her the professional help she needed. It was important to process those emotions and rebuild her life, while getting her husband the care he needed at the same time. She also needed to allow herself to see that there could be happiness and hope beyond the daily struggles of being a caregiving wife.

Marcy needed the support of her adult children and close friends. We presented them with a care plan for Marvin that included a transition to a memory care community. To her surprise, the people that loved her supported her 100%. They were all aware of the couple’s struggles and Marvin’s disease progression, but they did not want to embarrass them by addressing the situation. Now that we got the conversation out in the open, they were all going to play a supportive role in helping with this difficult time.

Many of our lives are like junk drawers. They can be messy and contain things that we do not want others to see. They can also contain hidden treasures and magical memories—photos of the grandkids, a hundred dollar bill in an old birthday card, a concert program from a memorable night, and a cork from a bottle of wine enjoyed on a cruise.

When I help seniors and their families navigate the senior living process, I often help people sort out their “junk drawers.” All our lives are both flawed and fascinating. When we accept this reality, we can process all of those concerns and emotions in a new context. This allows us to put a plan in place to take care of our loved ones when they need us most. This is what I call “Helping Seniors Finish Strong.”

More
Advisors
Trending
My Life is a Junk Drawer
Having the Conversation About Care Needs
Understanding Eldercare Payer Sources
Are My Parents Ready for Senior Living?
Categories